What is Visual Snow Syndrome? 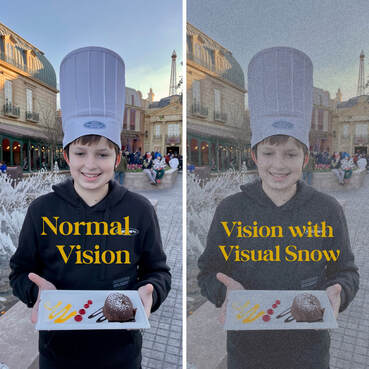 Visual Snow Syndrome (VSS), is a chronic, debilitating, and persistent neurological condition which affects a person’s vision, hearing, and brain function. The primary, and shared, symptom of VSS sufferers is Visual Snow. This resembles “TV static” and is perceived and seen as millions of moving and flashing dots over the entire visual field. This static is seen whether the eyes or opened or if they are closed. While Visual Snow itself is not as rare as once believe, Visual Snow Syndrome is. The full-blown syndrome carries multiple symptoms with it, in addition to the symptom of Visual Snow.


WHAT ARE THE SYMPTOMS OF VISUAL SNOW SYNDROME?

While the primary symptom of Visual Snow Syndrome is Visual Snow (static vision), there are numerous other symptoms that accompany this condition. Many of these are seen in migraine sufferers, making diagnosing VSS difficult for medical professionals who do not have a full understanding of the condition. Many patients are misdiagnosed with Status migrainosus, or a similar diagnosis in the migraine family. Here is a listing of symptoms that a VSS patient may experience:

WHAT MAKES VISUAL SNOW SYNDROME HARD TO LIVE WITH?

Because the brain of a VSS patient causes visual information to be processed abnormally, normal and everyday tasks can become more difficult. When trying to read the words and letters on the page or screen may start to produce afterimages, and these shadowed replicas will float and move over the words making them hard, or impossible, to distinguish. Driving often times becomes a daunting task because of static, night blindness, floaters, glare, light sensitivity, ghosting, and blue field entopic phenomenon.

DOES VISUAL SNOW SYNDROME PRESENT THE SAME IN ALL PATIENTS?

VSS presents differently in patients aside from the occurrence of Visual Snow (static vision). Some patients on the milder end of the VSS spectrum may have 2 or 3 symptoms, while severe cases may have 15+ constant symptoms. Also, some patients find that certain symptoms may fade over time, while others find that they add new symptoms after years of having VSS.


WHAT CAUSES VISUAL SNOW SYNDROME?
Researchers and doctors still do not have a conclusive answer to what triggers or causes Visual Snow Syndrome. There are many patient accounts out there, on what they believe set off, or triggered, their own personal VSS condition. These include, but are not limited to SSRIs, concussion, antibiotics, illegal drug use, head trauma, pregnancy, and most recently COVID-19.

While potential triggers have been identified by patients, the question remains, “when triggered, what area or areas of the brain are affected, and how are these affected? Research in recent years, has led us to see that the brain of a VSSer has hyperactivity in the visual cortex, and it is believed that the lingual gyrus is involved as well as the thalamus.

While awareness and research have multiplied over the past decade for Visual Snow Syndrome, this is still an incurable and untreatable condition. Doctors and patients can work together to try and alleviate some of the visual symptoms by the use of colored lenses or sunglasses. Patients may find white noise sound machines helpful to drown out the tinnitus. Sometimes treating an underlying condition, such as migraine, can help patients get some measure of relief from their Visual Snow Syndrome symptoms.

WHAT RESOURCES ARE AVAILABLE FOR PATIENTS

While there is no treatment, there are support groups for patients to join. Patients find it helpful to talk to others with the condition to ask questions and get reassurance about some of the many symptoms that they are experiencing. Most of these can be found online, on Facebook, due to the many miles between each patient. A full listing of groups can be found on the Eye on Vision Foundation website at https://www.eyeonvision.org/visual-snow-resources.html

WHAT IS THE EYE ON VISION FOUNDATION?

The Eye on Vision Foundation was formed in 2006, by me, Jennifer Ambrose, a Visual Snow Syndrome sufferer. When I developed VSS in 2005, Visual Snow Syndrome was not a condition that many doctors even had a name for. Patients were referred to psychiatrists, as the symptoms they were describing sounded unrealistic and unreasonable. It wasn’t until a migraine expert, Prof. Peter Goadsby, published a paper in 2014 entitled, “‘Visual snow’ – a disorder distinct from persistent migraine aura,”(2) that the medical community started to take notice and validate Visual Snow Syndrome. The Eye on Vision Foundation has worked closely with researchers on a global basis since day one and will continue to support both researchers and patients for many years to come.


THE FUTURE OF VISUAL SNOW SYNDROME

Research is happening on a global basis for Visual Snow Syndrome. There are currently doctors in England, Australia, the U.S., Germany, and Switzerland working hard to learn more about the basic science of VSS and how we might treat this debilitating condition. In order to accelerate the research process, more funding is needed. Funding for rare disease is difficult, and many times the financial burden falls on the patients themselves to raise the capital needed to fund these studies.  There are a handful of nonprofit companies around the globe working to raise research funding. To learn more, or get involved, please visit EyeOnVision.org


Article written by Jennifer Ambrose, founder of the Eye on Vision Foundation
EyeOnVision.org